In western cultures good news is often celebrated by a group of people having a few alcoholic drinks. For example, alcoholic drinks may be served to “wet the baby’s head” in the celebration of a birth. Buying someone an alcoholic drink is often considered a gesture of goodwill. It may be an expression of gratitude, or it may mark the resolution of a dispute.

Binge drinking is defined as drinking to excess. The concept of a “binge” has been somewhat elastic over the years, implying consumption of alcohol far beyond that which is socially acceptable. In earlier decades, “going on a binge” meant drinking over the course of several days until one was no longer able to continue drinking.

Derived from the roman “calix”or chalice, the first venetian goblets were ornate- full of decoration. The more and intricate the decoration, the more expensive the goblet and thus the higher in status the beholder.

In combining imagery of teenage binge drinking into a classic goblet style this work aims at enticing a viewer to feel admiration for the craftmanship, to also place the object in a status of elite society, while at the same time conveying a visible message to the onlooker of the perverted results that have led the use of alcohol to a point where its original intention has been lost completely. 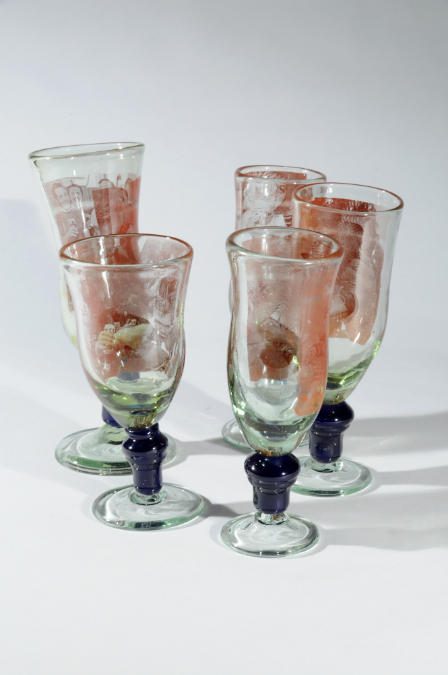